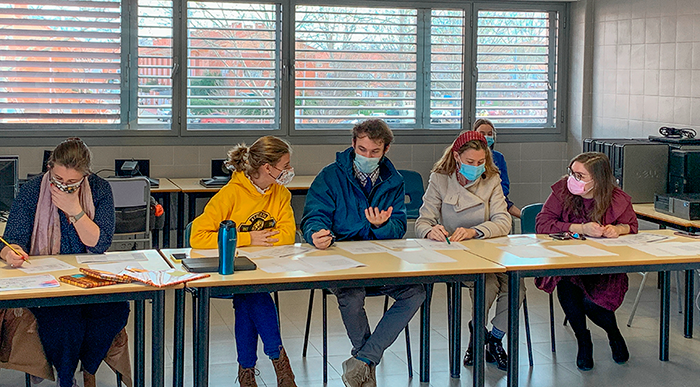 When we memorize a poem, it becomes a part of us forever. This is something our Primary school pupils know very well! Our poetry recitation contest is becoming more popular year after year and our pupils are not only improving their pronunciation and memorization skills but they are also gaining self-confidence.
In January we asked all the children in Years 1 to 6 to learn one poem by heart from the ones read in class. They memorized from nursery rhymes in Year 1 to poems by Robert Louis Stevenson and Emily Dickinson in Years 5 and 6. They recited their poems to their classmates and teachers and one pupil from each Year group went through to the Grand Final which took place on 12th February.
We were amazed at the enthusiasm and high level of performance shown by every pupil. Well done!
Hats off to the winners:
• Year 1: Jaime Sebastián, Year 2: Ana Chiva, Year 3: Valeria Archilla, Year 4: Carlota Garre, Year 5: Mencía Fernández and Year 6: Almudena Heitzmann.

This website uses cookies to improve your experience while you navigate through the website. Out of these, the cookies that are categorized as necessary are stored on your browser as they are essential for the working of basic functionalities of the website. We also use third-party cookies that help us analyze and understand how you use this website. These cookies will be stored in your browser only with your consent. You also have the option to opt-out of these cookies. But opting out of some of these cookies may affect your browsing experience.
Necessary Always Enabled

Any cookies that may not be particularly necessary for the website to function and is used specifically to collect user personal data via analytics, ads, other embedded contents are termed as non-necessary cookies. It is mandatory to procure user consent prior to running these cookies on your website.